If you are reading this in your email, don’t forget to click on the headline to go to my blog so you'll be counted as a reader. If you haven’t subscribed yet, please do.
It’s been a bit of a gap since my last post, but I’ve been very busy with reading and writing and baseball. I’ll talk about each of these today, with the bulk going to reading and a review of something I’ve read. But first, from Grandma’s Sports Desk…
As those of you who have read my work know, baseball is a very big part of my life. It has a major role in some of my works and a minor role in some others. There’s a reason for that. It’s always been something I’ve enjoyed – playing at family gatherings and in school, watching the teams in whatever town I lived – but became a force after I met my favorite son-in-law, Gordon. (I only have one son-in-law, so I can say that, but he’s also a favorite person in my life.) Gordon lives, eats, and breathes baseball. He taught me to really love the game and helped me learn the nuances and to appreciate the beauty of it. He also passed all this along to our grandson, Gehrig, age nine. This is a boy who is living up to his name.

Yesterday, Gehrig’s Little League team was in their first game of the playoffs. I don’t know what position they were in – maybe fourth or so, but they had to play the first place team. His team played with great heart, surely playing the best game of their season. Gehrig was behind the dish for three innings and made some great plays, saving at least one run on a great tag out at the plate. Then he pitched for two innings -- the first of those was an 11 pitch, 3 up 3 down inning. He got on base every at bat and had a key RBI hit.The other team even tried to intentionally walk him – in a Little League game! Unbelievable. Even though Gehrig's team lost by one run, the coach of the winning team awarded the game ball to Gehrig. What a night. What a game. I am so proud of all the kids. They were awesome. And, not that I’m biased, Gehrig absolutely deserved the game ball. He was the best player on the field. Anybody ever tells you Little League is boring, you are talking to someone who doesn’t know baseball.
I love having a blog. I can write about anything I want. Now back to our regularly scheduled programming. I’ve been writing a lot and am busy making submissions this week and next, sending out things I believe are finally, really ready. I’m not superstitious, but I am buying both a Ganesha and a St. Jude this week to keep on my desk. Keep your fingers crossed for me, but please don’t let that prevent you from leaving a comment!

As far as reading goes, I’ve been plowing through things – some for reviews for the Sacramento Book Review and some for pure pleasure. Some are in both those categories. Back in March, I wrote a post called An Homage to Writing God Chris Crutcher. If you haven’t seen it, click here and have a peek. In that post, I mentioned I would review his new book, Angry Management

, as soon as the Sacramento Book Review published what I wrote for them. You can see the short review by clicking here, if you like, but I’d like to expand on that a bit. In case you haven’t figured it out, I’m a huge fan of Chris Crutcher.
Angry Management

is comprised of three novellas. The characters in these stories are largely characters Crutcher fans already know, characters from earlier works. How often have you read a book, fallen in love with the characters, and wished you could visit with them more? Well, he’s giving us just that opportunity. The stories are framed by group counseling sessions run by a Japanese-cowboy-counselor by the name of Nak (Mr. Nakatani), a character from the first Crutcher book I ever read – Ironman

. Nak is working with kids going through tough times, facing difficulties beyond their years.
The first novella, Kyle Maynard and the Craggy Face of the Moon is a story of great hope and beauty. Sarah Byrnes (Staying Fat for Sarah Byrnes

) was horribly abused and physically scarred, then abandoned, as a child. Angus Bethune (Athletic Shorts

) is a big guy. Not just big, but enormous. He comes by it honestly. His parents are enormous as well, and divorced, and re-married to each of their gay lovers. Woof. How bad can it get? But however bad it seems, there is great redemption in this story of two flawed people. It is a coming-of-age story, although atypical in that these two are already quite mature, but they haven’t really come into their own yet. It’s also a love story and one of the most satisfying you can read.
Montana Wild takes on issues of the foster care system with the story of beautiful, smart Montana West (The Sledding Hill

), editor of the school newspaper and adopted daughter of the president of the school board. Uh-oh. Looks like trouble. When Daddy Dearest throws obstacles in the way of publishing her controversial article, she ends up doing an article on the football team. She’s not prepared to fall in love with one of the bad-boy football players, Trey Chase (new character for Crutcher), but she does. They decide to take on the establishment (read Daddy) together, with the support of Trey’s incredible grandmother. (I love incredible grandmother characters!) The showdown scene couldn’t be better.
Meet Me at the Gates, Marcus James is, in my mind, the greatest gem in this book of finely cut gems. Marcus (another new character) is black and unabashedly gay. Unfortunately, he is the only student in his up-tight, small-minded high school to be either black or unabashedly gay. Oh, and he’s got an IQ of Rhodes Scholar caliber and is a great swimmer. When someone leaves a pink noose on his locker, he decides he should wear it – since it was a gift and all. One of his teachers, Mr. Simet (Whale Talk

) does what he can to help Marcus through it, but his greatest, and unlikeliest, ally turns out to be Matt Miller (Deadline

). This is a powerful story and not one for the faint of heart. 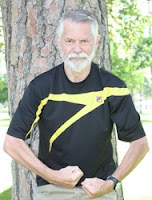 Chris Crutcher doesn’t write tidy little stories with perfect characters. He writes about flawed, often damaged (read as REAL) characters confronted with the all-too-common problems young people face today. I’ve never read a word in his books that seemed contrived or unreal. I've never read a line of dialogue that seemed anything less than authentic. This is a terrific book, perhaps his best, but it’s hard for me to choose a best from his long list of fine books.
Posted by Rosi at 8:39 PM

A well-deserved congratulations to Gehrig! And I've discovered that I can type with my fingers crossed if I do it two-finger style. :) I hope it helps you net a publishing contract that leads to a long and satisfying partnership. I hope you'll post a blog soon to let us know which books you're shopping where. Regarding your review? The last paragraph is brilliantly said and so true.

Great post, Mom! You know I don't read much fiction, but this makes me want to sit down with a stack of Chris Crutcher.

Great review, Rosi. I really haven't read Chris Crutcher, although I met him at a conference once. I usually read adult mysteries or MGs and PBs, so I haven't realy read that many YAs. Now I'd like to. I also know nothing about baseball, but your post made me actually want to see a game! That's some achievement. Good luck on your contest entries. Looking forward to your next review.

What a fun post. Congrats to Gehrig, for sure. There is just something about summer and baseball! And the very best of luck on your submissions. For a long time I kept a little brass Ganesha on my monitor at work. As patron of writing, I figured he covered writing software as too, and things worked out pretty well :-)

I can remember playing slow pitch in my younger years and it was very competitive. Lots of trash talking and psyching out the other team. I miss it.

Hi Morgan, Margaret, and Stacie. Thanks for the comments. Baseball is the best thing about summer. And the psyching out thing starts out pretty darned early. It's amazing.