Interview with Mark Goldblatt and More

"When the well is dry, for me, it's usually more about attitude than inspiration or lack of inspiration. It seems to me so much of writing is about courage, writing something so raw you don't want to say it aloud." ~Nicole Bernier~

Gifts for my Writer Friends:

If you click HERE you will find a really great post about blogging from Anne R. Allen.

Stephen King always has something interesting to say. Click HERE to see what he has to say on opening lines.

When last we visited, I offered a copy of Twerp by Mark Goldblatt. If you missed that review, you can click HERE and read it. The winner of the drawing this time is . . . . wait for it . . . .  Joyce Moyer Hostetter! WOO HOO! Congratulations, Joyce. I will be getting the book out to you this week. If you don't know who Joyce is, you can find out more about her and her incredible books by clicking HERE. Joyce has written some amazing books. I reviewed her Healing Water: a Hawaiian Story on my blog a long time ago. You can see my review HERE. I have another giveaway at the end, so be sure to read all the way through.

After I read (and fell in love with) Twerp, I sent an email to Mark Goldblatt and asked if he might do an email interview. Even though it is that busy time of year for those who teach, he was kind enough to do that, even though I actually called him Matt in one of my emails. (My face is still red.) I hope you enjoy it. He is a funny guy. It was fun for me!


I had the feeling reading Twerp that you had gone to visit your parents and found your old journal in your room, the voice in the book was so real. How much of the book was autobiographical? 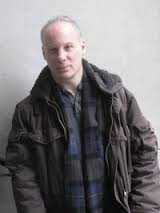 I’ve been asked this question in several interviews, and I always struggle with it. Obviously, there’s a lot of me in Julian, the narrator of Twerp. But if I start ticking off a list of autobiographical elements in the book, I worry about the effect on readers. It changes the experience of reading a book, I suspect, if you’re thinking, “Well, that definitely happened, and that might have happened, but I’m not sure about that bit there.” It’s better to imagine the entire thing as artifice—to focus on the story itself rather than on the creation of the story. Julian is way more interesting than I was as a child. He’s way more interesting than I am now. (But I think I could have taken him in a 40 yard dash.)

As an old English teacher, I thought Mr. Selkirk was pretty cool. Was there a Mr. Selkirk in your life who inspired you to become a writer? Can you tell us a little about a teacher who meant a lot to you while growing up?

I’m an English teacher myself—I teach developmental English at Fashion Institute of Technology, a branch of the State University of New York (where I also lecture in religious history)—so I think a lot about the teacher-student relationship.

On the one hand, I had an English professor my junior year at Queens College named Sandy Schor (one of my favorite names of all time!) who got special permission for me to write a novel in lieu of attending classes for an entire semester. I wound up auditing classes anyway (which may have been part of the learning experience, come to think of it) as I wrote the book. I don’t know if I would have taken writing very seriously—I was still a math major at the time and thought of creative writing as a hobby—if not for her.

On the other hand, some of the teachers who had the greatest impact on me were not necessarily the ones I liked, or the ones who were the most fun. In sixth grade, for example, I had an English teacher named Mr. Stein—not the model for Mr. Selkirk by any means—who was an absolute stickler for grammar. I didn’t like doing the work for his class; it was drudgery, and there was a lot of it. But the lessons stuck, and not a day goes by where I’m not grateful for those subject-predicate drills.

Your writing has such a great, natural flow to it. Do you spend a lot of time planning your writing – outlining and such – or is it a much more organic process for you?

I can’t write a book unless I know the first sentence and the last sentence, so I tend to have a fair overview of the plot from the outset. But there’s obviously a lot of improvisation and discovery in between—I jot down lots of notes on scrap paper. I make a mess of both my virtual and actual desktop. I don’t work from a formal outline however.

As writers, we all hear so much about the editing process. Did you have to do a lot of re-writing once Twerp was placed with Random House?

Actually, no. My editor, Chelsea Eberly, didn’t want me to change much, and her changes tended to be right on the money. Most importantly, she edited the book to make it a stronger book, not make it a neater fit for the middle grade market. I was worried about that because, to be honest, I’d never intended to write a children’s book. I was three-quarters done with the first draft, writing what I thought would be an adult novel narrated by a 12 year old, when a writer friend informed me that if I had a 12 year old narrator, I was writing a middle grade novel. I’m embarrassed now to say that I’d never even heard the term before. All my other books had been for adult readers.

The irony—and I know this is far afield from your original question—was that once I began to think about writing for children rather than for adults, I was lost. For a solid week, I was typing stuff that sounded more like a public service announcement than like a novel; I wound up having to chuck a couple of thousand words. Finally, I just put the eventual audience out of my mind. I thought: “I know these characters. I love these characters. Let me just get out of their way.”

But, to awkwardly segue back to what you asked, I did less re-writing than supplementing. There were sections Chelsea wanted fleshed out, and her instincts were better than mine.

I probably write—sit down at my desk and write—for a couple of hours per day, but I spend a lot more time composing in my head. I record voice memos on my phone, often when riding the train or walking down the street, and transcribe them later.

If you could cast the movie of Twerp, who would play whom?

Well, obviously, Denzel Washington would have to play Julian . . .

I noticed on your web site you are planning a sequel. Can you tell us anything about it? When can we get our hands on it?

I’m roughly half way through the first draft. All the main characters in Twerp will be back. The only thing I’ll say about it at this point is that you’ll see more of Beverly Segal and Rabbi Salzberg in the sequel. If all goes well, I’m guessing it should be out around the summer of 2015. (Geez, that seems a long way off!)

What were your favorite books when you were growing up?

I loved a book called The Middle Moffat by Eleanor Estes. Also, Dr. Seuss. (You can see the Dr. Seuss influence, I think, in my adult novel, Sloth.) The first grown up book I read that I actually liked was Great Expectations—I think that was around seventh grade.

What is the best piece of advice you’ve been given as a writer?

Read a lot. Read the classics, the dead white guys. (The deader, the better.) Even if it tastes like medicine, read them.

What advice would you pass along to those of us who haven’t gotten that first book published?

Tom Seaver, the Hall of Fame New York Mets pitcher, once said that the keys to any pitcher’s success on the mound were velocity (the speed he could throw the ball), location (the accuracy with which he could throw it) and movement (whether the ball traveled straight—which was bad—or veered as it got to the batter). He said that if a pitcher had any two of these going for him, he could win. But if he only had one, he was dead.

I think something similar exists for writers. There are three keys to success in getting published: talent, persistence and luck. You can get by with any two of them. But if you’ve only got one of them going for you, you’re dead—which is especially unnerving, I know, since persistence is the only one of the qualities you can totally control. So I guess my advice would be to persist … because that’s all you can do.

That's it from Mark. Now on to the giveaway for this week. Since many of you are writers, I have a writing book to give away this week. It is Kicking in the Wall by Barbara Abercrombie. I reviewed this for the San Francisco/Sacramento Book Review and you can read my review by clicking HERE. If you are a follower of my blog (it's easy to do -- just look on the right hand column) and leave a comment, I will put your name in a drawing. If you share my link on Facebook, Twitter, or some other such thing, let me know and I will give you an extra chance. This giveaway is for U.S. addresses only.

Don't forget to stop by Shannon Messenger's wonderful blog for more Marvelous Middle-Grade Monday book reviews and giveaways. You can check it out by clicking HERE.

I'm hoping to get back to weekly posting now that summer is coming to an end, so see you soon!